A note about the room capacity: 12 people would have been way too many for this room. Even 6 people was pushing it. My advice is to play with a group of 4 or less.

First Impressions
This company has at least 2 locations, one in Villa Park and one in Wisconsin Dells, so they must be doing alright. Their website looks professional and we booked with a coupon easily.

The company is located in a small building in an area of Villa Park that’s kind of run down. We pulled up feeling a little unsure, but inside everything seemed okay. There was nothing fancy about the lobby or interior; just some Halloween-themed decorations and paint on the walls. Everything seemed pretty basic.

Our group of 4 played with 2 strangers that had booked with us, neither of whom had ever played an escape room before (aka an enthusiast’s worst nightmare.) While we were waiting for them to arrive, we stood around near the front desk that was oddly placed farther back into the building and not near the front door. Some of the employees were talking to each other at the desk and one complained about how much of a pain The Basement room was to reset, while eating a bag of Cheetos. Not the most professional look for the company, and definitely poor customer service, making the customers feel like they were creating a burden for anyone. Thankfully, the employee doing the complaining did not end up being our Game Master.

Setup
We placed our coats and personal belongings in a closet near the front desk, and I was of course happy that they remained outside of the room. We came up with a team name, wrote our own nicknames on name tags, and then were brought into a side room to go over the rules and watch an intro video. It was a plus that this was done in a room separate from our game room, although apparently the intro video was made up of clips from a Netflix documentary or something similar.

We specifically wanted to play this room because it was based on HH Holmes, and the three of us that had read Devil In The White City were fascinated. The story for this room on the website is as follows:

“During the 1893 Chicago World’s Fair, criminal mastermind and first documented serial killer H.H. Holmes built and operated a labyrinth-style hotel on the corner of South Wallace & 63rd Street. It was designed as a killing trap, whereby his guests became murder victims – allegedly over 200. The basement of that hotel was where most of the killings, torture and burials took place. Do you have what it takes to match wits with the evil Doctor Holmes? The secrets of his dark and foreboding lair need to be discovered before you become his next medical experiment!”

Game Play
In this room the Game Master remained in the room with us the entire time. Normally I wouldn’t prefer having the GM in the room while playing, but in some ways I actually felt like it spurred me to try and do better, like someone was actually closely watching every success or failure and my pride was more at stake. 🙂  We still only had 3 clues to use, and I felt he did a good job overall of not giving us extra nudges or hints just because he was physically there.

As for the puzzles in the room, my thoughts are all across the spectrum. On the one hand, this was one of the most enjoyable rooms I’ve played to date because I felt like a lot of the puzzles matched my personal strengths. I felt like I was just on the same wavelength as the puzzle designer and was able to personally solve a lot of things in the room, and it made the experience really exciting and fun for me. I had some great a-ha moments and it makes me happy to think back on how thrilling it was to figure things out like that.

On the other hand, there were a few things about the room that really annoyed me. First of all, it was dark. I can appreciate setting the tone and atmosphere of a room with low lighting because it does make a big difference in the overall feel of a room. I get that. But I think there should have been at least one area with a little brighter lighting that we could have used when we needed to see something a little more clearly. There was one whole section of the room where I felt basically useless because I don’t have great vision and just could not see details on things well at all, and that’s no fun.

Another sticking point for me was that we had blacklight flashlights to use at one point, but there weren’t enough for everyone in the group. There were 4 flashlights and 6 of us, so we had to keep asking to use them from someone else (which is even harder to do when you’re playing with strangers and want to be polite. Although our groupmates were super nice and chill and a pleasure to play with, so there were no issues there. But just imagine if there were actually 12 people in that room!) In theory, I suppose you could make the argument that almost all puzzles in escape rooms are set up so that only 1-2 players will get to solve each one, so maybe only allowing some people to use a flashlight follows that same setup. But when a blacklight flashlight is used to search a room, then I feel like it falls under the “searching” category of clues, and that’s normally something all players in the room can do at the same time. In that scenario, whenever you’re someone not holding a flashlight, you’re somewhat excluded from the game. It might not be the worst thing, but it did cause some frustration.

One of the puzzles was taken word for word out of a Harry Potter book, and I recognized it the moment I saw it. Besides that just not being cool because they stole from the book, it’s lazy. Take a few minutes, write an original clue, and replace that ASAP.

Finally, this room had a LOT of red herrings. These were not pieces of decor that we created puzzles out of in our minds, they were things that matched real clues exactly and just didn’t end up being needed. The fun in an escape room comes from finding and solving a puzzle, not finding a puzzle and wasting time on it before realizing it’s not even a part of any solution whatsoever. I am of the belief that red herrings have no place in a good escape room. If you build your room and design your puzzles well, that’s all players need. They’ll create their own diversions anyways. 🙂

We technically did not beat this room, but for the record, all we had left was to insert the key in the lock and open the door. It’s crazy that we came that close and lost in the very last seconds of the game, but it also makes for a good story.

Final Touches
I felt like our Game Master had really been rooting for us, which was nice. He had us put our nametags with our nicknames on the wall with all the others, and then was more than willing to take a few pictures for us. We also all received a plastic cup with the company logo on it, which was nice. (If we had escaped we would have received a t-shirt.) He was very friendly and I appreciated having him as our GM. 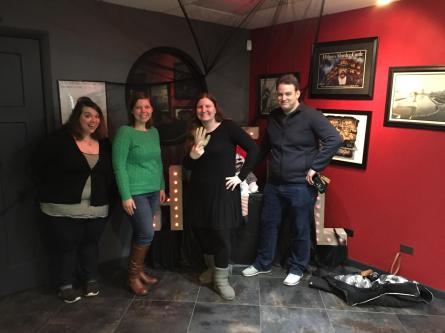